King of Kings 3 is a 3D Fantasy MMORPG published by Gamigo with a strong emphasis on PvP battles. Players can create their own guilds and fight for control over land in the game world. Guilds that control territory are free to build their own cities. Graphically speaking, the game looks a bit dated, but it has a very strong emphasis on PvP. PvE fans aren’t completely ignored though, as the game boasts thousands of quests and a high level cap. Auto navigation features make progression simple, but players will have to wait until level 50 to make their first job change. 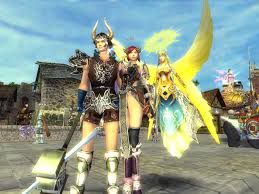 King of Kings 3 Gold Warrior - The most physically powerful class, able to carry the heaviest armor and most powerful weapons.

Berserker - All out offensive fighters that can deal heavy damage at close range. Berserkers can dual-wield.
Ranger - Versatile fighters that are masters of the bow and blade.
Knight - Mounted fighters equipped with a lance and bow.

Mage - Fragile in body, but powerful in mind. Mages can cast devastating spells from a distance.

Sword Mage - Armed with crystal infused blades, Sword Mages can deal heavy damage but are still fragile.
Conjurer - Conjurers can harness the power of nature to deal heavy damage to their opponents.
Wizard - Masters of elemental magic, Wizards have high damage potential but rely on allies to project them.

Cleric - A supportive class that can heal and buff allies during battle. Clerics are devout and benevolent soldiers.

Scholar - True believers who are granted enormous healing abilities and the KOK3 Gold power of resurrection.
Bishop - Bishops have learned from Mages and are capable of offensive and defensive abilities.
Priest - The devotion of the Priest allows them to discharge pure holy light and call on angels for aid during battle.