"MegaTen" is the name used to refer collectively to the various games in the "Shin Megami Tensei" / "Megami Tensei" franchise. Considering the vast number of them, "MegaThirty" might be more appropriate! (But that's not where the name comes from, obviously). So far I'm just putting this page up in order to record concisely which of the games are available on which platform. More may be added later. EG, info on which games had official English language versions (most of them were Japanese only), which others had fan-made translations. 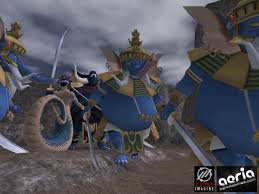 Imagine, also known as Megaten Gold, is a 3D Sci-Fi MMORPG based in the popular Shin Megami Tensei anime universe. Play as a Demon Buster in the apocalyptic future of Neo Tokyo. MegaTen offers unique skill-based progression, and an expansive pet system in which players summon demons they have subdued.

Shin Megami Tensei: Imagine is a science-fiction MMORPG loosely based on the Megami Tensei universe used in many Japanese console RPGs, the most recent of these being Persona 4. Because of the lengthy title, Imagine goes by several names. Aeria, the North American publisher, uses the title MegaTen. The most notable feature in Megaten is definitely the skill-based progression system with dozens of skills available to all classes. These skills are called ‘expertises’. Play as a Demon Buster whose role it is to subdue demons and put them under your control. Major game events are broken down into Acts, which usually have difficult bosses at the end requiring small groups to defeat. At this time, MegaTen contains no Megaten money PvP content.